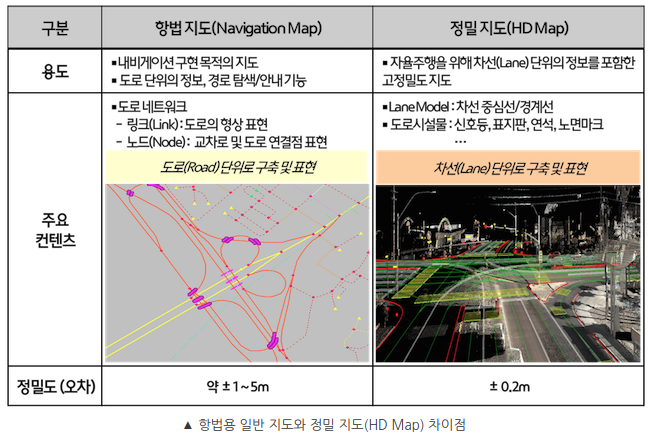 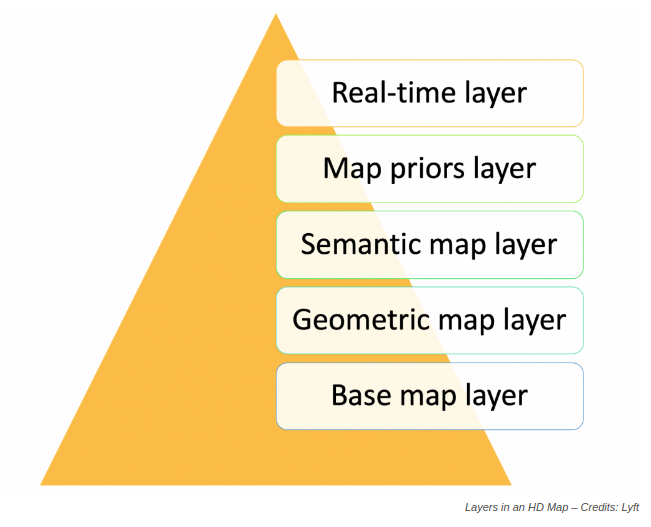 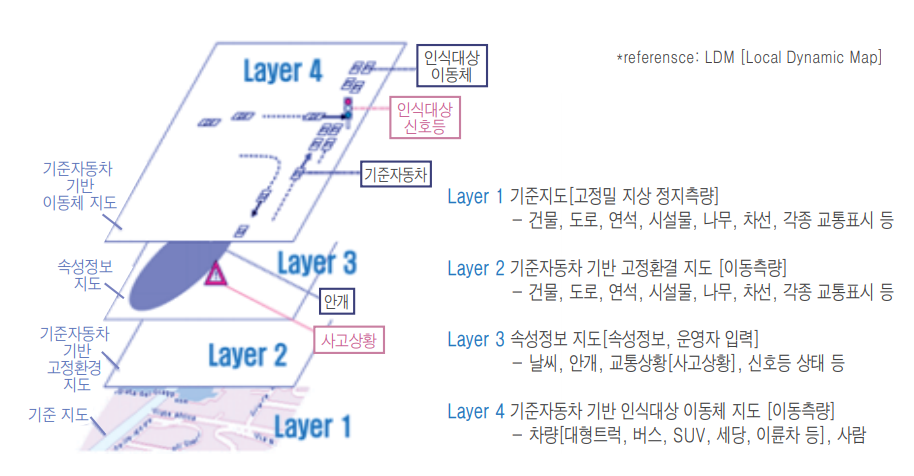 현재 제공되고 있는 인터넷 맵 수준의 지도 We think of the basic road network data offered by web map services as being the bottom most layer.

The semantic map layer builds on the geometric map layer by adding semantic objects. Semantic objects include various traffic 2D and 3D objects such as lane boundaries, intersections, crosswalks, parking spots, stop signs, traffic lights, etc. that are used for driving safely. These objects contain rich metadata associated with them such as speed limits and turn restrictions for lanes. While the 3D point cloud might contain all of the pixels and voxels that represent a traffic light, it is in the semantic map layer that a clean 3D object identifying the 3D location and bounding box for the traffic light and its various components are stored. We use a combination of heuristics, computer vision, and point classification algorithms to generate hypotheses for these semantic objects and their metadata. The output of these algorithms isn’t accurate enough for us to produce a high fidelity map. Human operators post-process these hypotheses via rich visualization and annotation tools to both validate the quality and fix any misses. For example, to identify traffic lights, we first run a traffic light detector on the camera images. Visual SLAM is used to process multiple camera images to get a coarse location of the traffic light in 3D. Lidar points in the local neighborhood of this location are matched and processed to produce the bounding box and orientation of the traffic light and its sub-components. We also employ heuristics for solving simpler problems. One area where we’ve found heuristics to be useful is in the generation of lane hypotheses, yield relationships, and connectivity graphs at intersections. There is a lot of structure in how these are setup for roads, especially since there are local laws that ensure consistency. Feedback from the human curation and quality assurance steps is used to keep these up to date.

The geometric and semantic map layers provide information about the static and physical parts of the world that are important to the self-driving vehicle. They are built at a very high fidelity and there is very little ambiguity about what the ground truth is. At Level 5, we view the map as a component that not only captures our understanding of the physical and static parts of the world, but also dynamic and behavioral aspects of the environment. The map priors layer and real-time knowledge layer represent this information. Information in these layers is computed not only from logs from the AV fleet, but also from the Lyft ridesharing network comprising millions of Lyft drivers. This scale is necessary to achieve high coverage of the map priors and ensure freshness of the real-time information.

The map priors layer contains derived information about dynamic elements and also human driving behavior. Information here can pertain to both semantic and geometric parts of the map. For example, derived information such as the order in which traffic lights at an intersection cycle through their various states e.g. (red, protected-left, green, yellow, red) or (red, green, protected-left, yellow, red) and the amount of time spent in each state are encoded in the map priors layer. Time and day of week dimensions are used as keys to support multiple settings. These priors are approximate and serve as hints to the onboard autonomy systems. Another example is parking priors in the map. These parking priors are used by the prediction and planning systems to determine object velocities and make appropriate decisions. Parking priors are represented as polygonal regions on the lanes with metadata that capture the probability of encountering a parked vehicle at that location in the lane. When the AV encounters a stationary vehicle in a map region with high parking prior, then it will more aggressively explore plans that route the AV around the vehicle and demote plans that queue up the AV behind the vehicle. Similarly, knowing where people normally park allows perception systems to be more cautious to car doors opening and detected pedestrians as they might be getting in and out of cars. Unlike information in the geometric and semantic layers of the map, the information in the map priors layer is designed to be approximate and act as hints. Autonomy algorithms commonly consume these priors in models as inputs or features and combined with other real-time information.

가장 최상위층으로 동적인 실시간 교통 정보를 나타낸다. 이정보들은 차량간에 공유 될수 있다. is the top-most layer in the map that is dynamically updated contains real-time traffic information. This data can also be shared in real time between the fleet of autonomous vehicles.

What are HD Maps, how are HD Maps made, HD Maps for self-driving cars