Getting to know asynchronous JavaScript: Callbacks, Promises and Async/Await 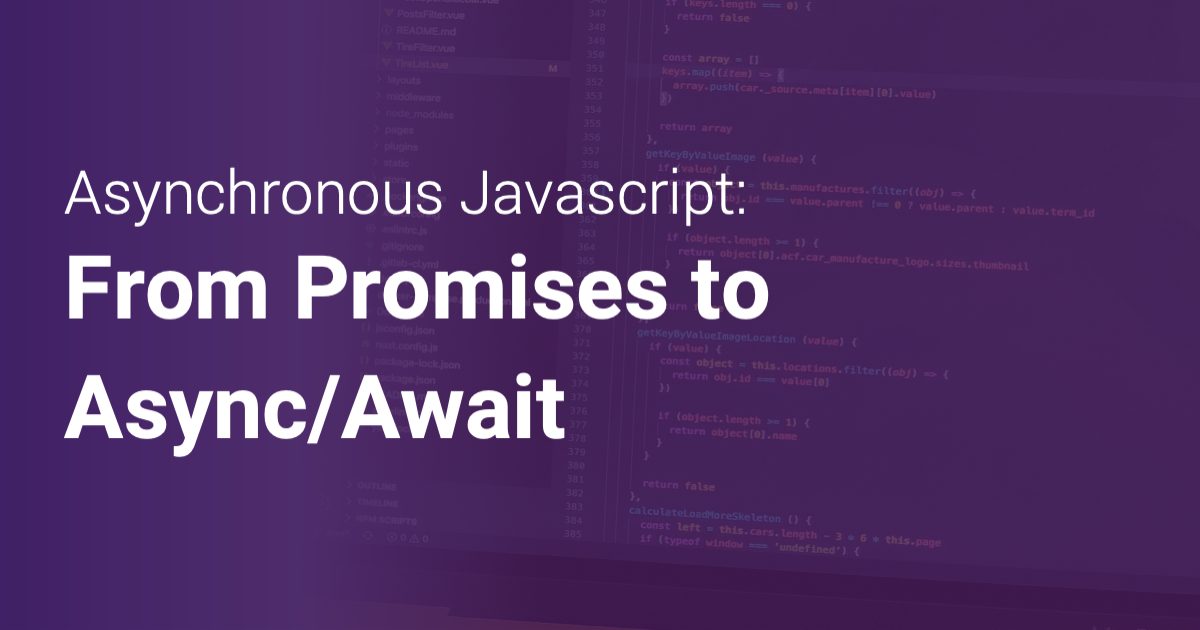 Synchronizing asynchronous tasks in JavaScript was a serious issue for a very long time.

this is fairly simple all we need to do is pass in a function which we want to execute after the asynchronous operation is done But,the major problem this approach introduces is when we want to do multiple asynchronous calls and we have to do them one after the another... it introduced what is popularly known as call-back hell. looks similar to below code:

since every async call depended on the data fetched from the previous call it had to wait for the previous one to complete. This works but it was very hard to debug and maintain.

The constructor syntax for a promise object is:

Its arguments resolve and reject are callbacks provided by javascript itself. The code above is only inside the executor.

When the executor obtains the result, be it soon or late, doesn’t matter, it should call one of these callbacks:

resolve(value)- if the job finished successfully, with result value.
reject(error) - if an error occurred, error is the error object.

So to summarize: the executor runs automatically and attempts to perform a job. When it is finished with the attempt it calls resolve if it was successful or reject if there was an error.

The promise object returned by the new Promise constructor has these internal properties:
State - initially pending, then changes to either fulfilled when resolve is called or rejected if there was an error.

JavaScript’s built-in Fetch API returns a promise object which we can then chain promise methods on to, in order to handle the response.

The other approach is to use async/await. We use async on the function declaration and then await immediately before the request to the API. Rather than using the promise methods to handle the response, we can simply write any further handling in the same way as other synchronous Javascript.

As we are not using promise methods here we should handle any rejected promises using a try/ catch block.
What you’ll notice in both cases is that we don’t need to literally create the Promise object: most libraries that assist with making a request to an API will by default return a promise object. It’s fairly rare to need to use the Promise constructor.

Promise.all is a good option for asynchronous tasks that are dependent on another. If one of the promises is rejected, it will immediately return its value. If all the promises are resolved you’ll get back the value of the settled promise in the same order the promises were executed.
This may not be a great choice if you don’t know the size of the array of promises being passed in, as it can cause concurrency problems.

Promise.allSettled is handy for asynchronous tasks that aren’t dependent on one another and so don’t need to be rejected immediately. It’s very similar to Promise.all except that at the end you’ll get the results of the promises regardless of whether they are rejected or resolved.

Promise.race is useful when you want to get the result of the first promise to either resolve or reject. As soon as it has one it will return that result - so it wouldn’t be a good candidate to use in this code.

So, should I use chained promises or async/await?

What’s the difference between these two approaches? Not much: choosing one or the other is more of a stylistic preference.

Using async / await makes the code more readable and easier to reason about because it reads more like synchronous code. Likewise, if there are many subsequent actions to perform, using multiple chained promises in the code may be harder to understand.

On the other hand, it could also be argued that if it’s a simple operation with few subsequent actions chained then the built in .catch() method reads very clearly.

Whichever approach you take, thank your lucky stars that you have the option to avoid callback hell!